skip to main | skip to sidebar

My Dad, Frederick William Daigle, was a Canadian Olympian in the 1948 Summer Olympics that took place in London, England.  The games were officially known as the Games of the XIV Olympiad.  Sixty-four years later, and on the day of the official opening of the Games of the XXX Olympiad also taking place in London, England, I thought I would share some memories from my Dad's photo collection taken from the former Summer London Olympics in 1948.   A few of the photos were professionally taken and I will provide photo credits where given, but most are from Dad's own camera.  Dad, now 81, is not on a computer so would not have this ability to share these photographic memories.  They are, particularly relevant now with the Olympics taking place once more in London.

Dad is and always has been very humble and extremely shy.  While he was known to be an exceptional Boxer in his day, and was a Canadian Golden Gloves Champion, he downplays his Olympic "athletic" experience.  This outlet will thus serve to share some of the photographs taken during the 1948 Olympic Games which are entirely focused on the athletes themselves, rather than their competitions.  For those who believe that "a picture is worth a thousand words", and even moreso ... "the eyes are but a window to the soul", you will see, as I do, the true spirit these young athletes had through this photograph collection.  They had the opportunity to cross the Atlantic together as one team by ship; sharing their collective dream of representing Canada to the world at the Olympic Games.


Dad will undoubtedly be glued to his television from today through August 12th in his home in Montreal along with my step-Mom, Betty. The 1948 Olympics were the first Olympic games televised (in black and white, of course).

The London Olympics were the first Olympic games held right after World War II. Because of the War, there were no games held in either 1940 or 1944. The City of London had very little time to prepare to host these games, and no doubt the 59 participating countries had the same challenges in preparing their respective Olympic teams. 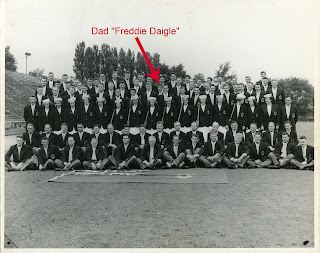 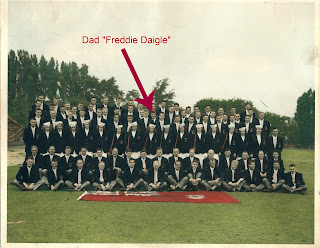